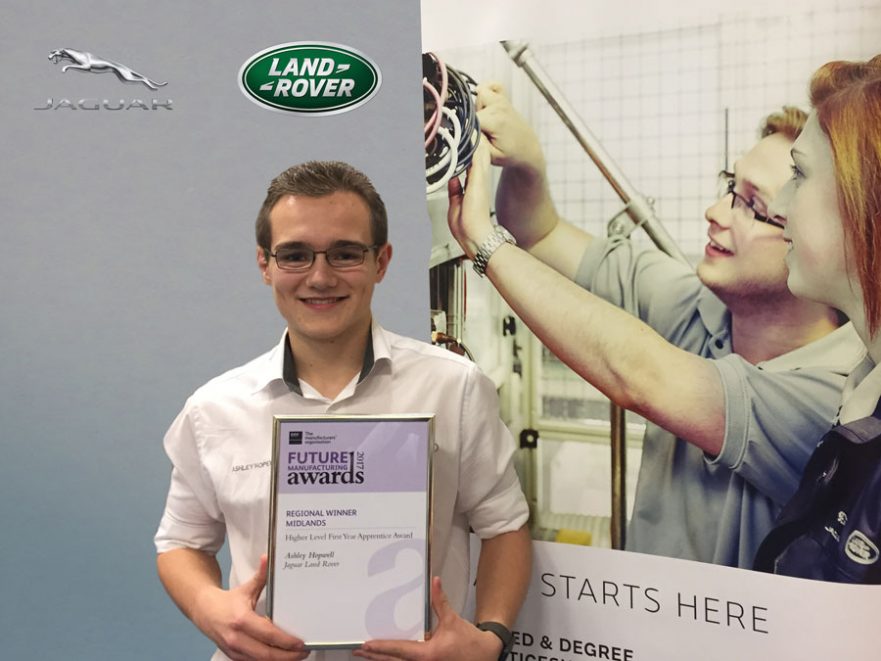 A former JCB Academy learner from Mickleover, Derbyshire has been crowned the best in the Midlands at this year’s regional EEF Future Manufacturing Apprentice of the Year Award.

Ashley Hopwell, who studied at The JCB Academy Sixth Form, was awarded the award for the Midlands region in the higher apprenticeship category and will now go through to the UK national finals in London next year.

Ashley joined The JCB Academy Sixth Form in 2014 where he studied mathematics, further mathematics, physics and product design. After studying at the sixth form, Ashley gained a degree apprenticeship at Jaguar Land Rover (JLR). The first year of the degree programme was spent at college where Ashley achieved distinctions in all subjects. Now in his second year, Ashley attends Warwickshire College one day a week, with the remaining in the engine manufacturing centre at JLR. Whilst in the workplace, Ashley spends time in each of the departments, gaining an understanding of how the overall centre operates.

Ashley said; “Choosing to attend The JCB Academy Sixth Form is a decision I will never regret, the opportunities that have been unlocked as a result of studying there have been endless. Attending a sixth form with a name such as The JCB Academy shows future employers that I was passionate about forming my career in engineering from a young age.”

Winning apprenticeship awards is becoming a frequent occurrence amongst former JCB Academy Sixth Form learners. In January, former JCB Academy Sixth Form learner Holly Broadhurst was crowned the best in the UK, winning the Apprentice of the Year at the UK national finals, and in July Louise Meredith took the award for Young Employee / Apprentice of the Year at Staffordshire Chambers of Commerce’s regional business awards. Holly said of The JCB Academy Sixth Form; “The difference for me was that I was still able to get my A-levels and also complete a Diploma in Engineering at the same time; this would give me the edge over other people who were only studying one of these qualifications but not both. I knew that it would be extremely hard work but in the long run, it has been 100% worth it.”

Mr Stanmore, Director of The JCB Academy Sixth Form said; “The sixth form at The JCB Academy works closely with several industrial partners to ensure that learners get as much as they can from their time here. Such partnerships provide opportunities for working with industry professionals on projects that contextualise their learning. This offers a unique learning experience that many other sixth forms don’t offer and contributes to what gives our leavers the competitive edge as they enter the world of business.”