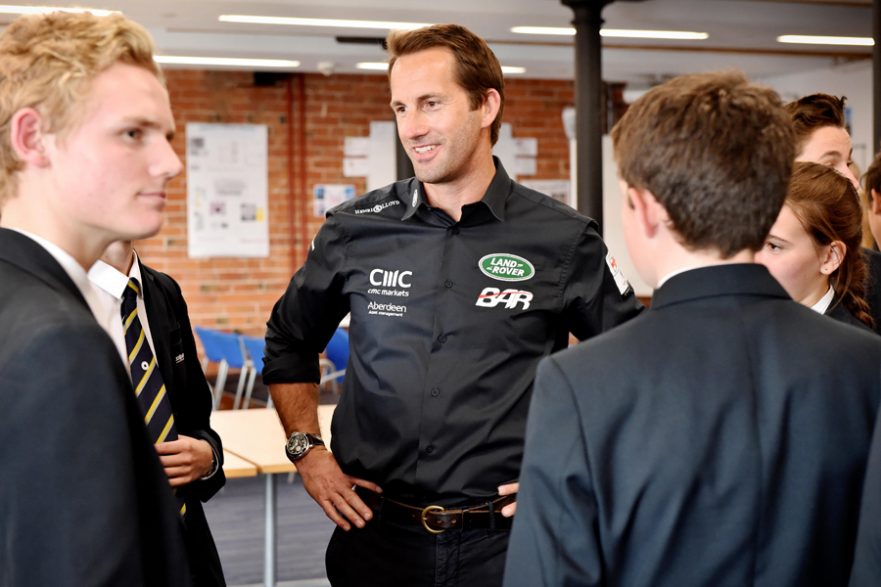 As well as talking about his Olympic success – which saw him win four consecutive golds between 2000 and 2012 in Laser and Finn class races – Sir Ben also answered questions from learners who are learning about engineering and business at the East Staffordshire school.

Sir Ben also focused on his America’s Cup experiences. After winning the prestigious trophy with Oracle Team USA in 2013, Sir Ben attempted to secure the title for Great Britain earlier this year with his Land Rover BAR team in the 35th America’s Cup which took place in Bermuda.

The team was eventually knocked out of the contest in the semi-finals by Emirates Team New Zealand which went on to win the overall competition. The British sailing legend is now focused on Land Rover BAR winning the 36th America’s Cup in New Zealand in 2021.

Sir Ben said: “It was inspiring to see how engaged the learners were at The JCB Academy. Their questions were mostly about the design of the Land Rover BAR boat and how it performed against competitors’ boats on the water, so it’s clear to me that the Academy’s engineering-based curriculum is truly creating tomorrow’s designers, engineers and business leaders.”

Year 12 learner Ethan Lowing, aged 17, from Burton-on-Trent said: “Sir Ben Ainslie is a hero of mine and as I love sailing, it was great to hear about his experiences from the America’s Cup and the Olympics. It was an inspiration for us all to hear first-hand about Sir Ben’s pride in representing Great Britain at the highest level of the sport and the important role of design in getting an edge on other competitors in sailing competitions.”

JCB is an official supplier to Land Rover BAR, having made equipment available to the team during the three years in the run up to the 35th America’s Cup. The fleet included the JCB Teletruk forklift, power generators and lighting towers. JCB also provided support with hydraulic technology, which is an important engineering feature on the boat.

During a tour of the JCB Academy, Macclesfield-born Sir Ben, who was accompanied by Principal Jim Wade and Chair of Governors David Bell, was shown how lessons on hydraulics and other engineering skills form part of a wider curriculum for 14 to 18-year-olds at the school. He also met some of the recent intake of JCB apprentices who were learning about the theory of welding in the school’s workshops.

Photographs from the visit can be viewed on our Google Photos account at https://photos.app.goo.gl/pHxGCdQclproJqrB2