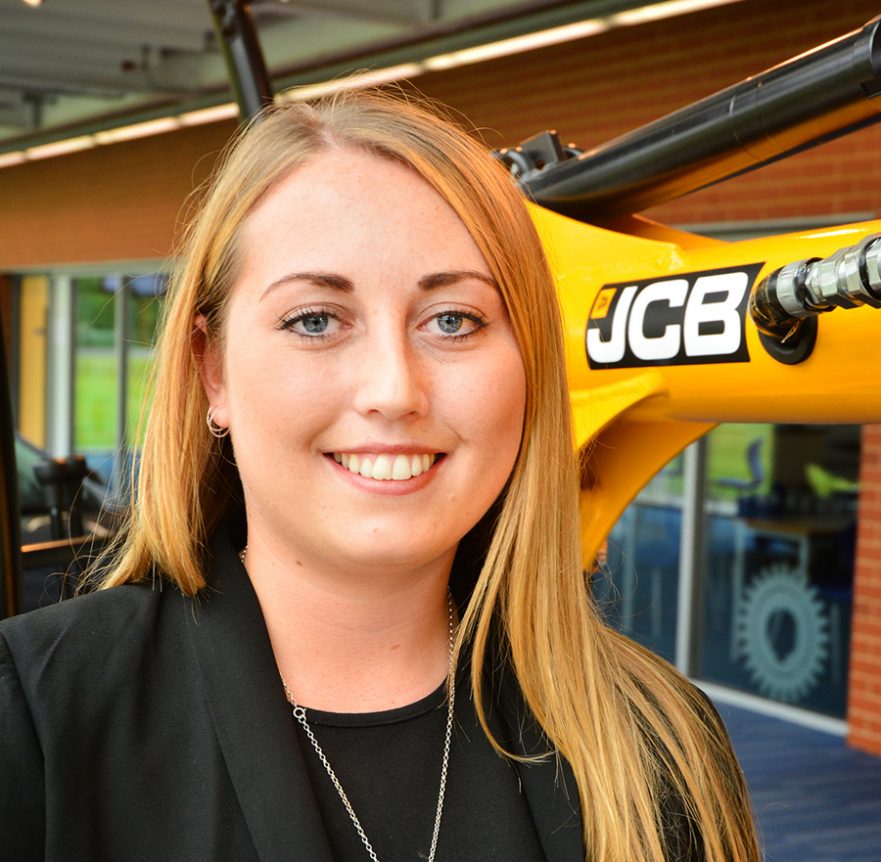 A former JCB Academy Sixth Form learner from Leek has been crowned the best in the country at the National Apprenticeship Awards.

Holly Broadhurst who studied at The JCB Academy Sixth Form and also attended the academy, was named the Nuclear Decommissioning Site Licence Companies Higher and Degree Apprentice of the Year. The awards presentation was held at London’s Grosvenor House where Holly won the award ahead of hundreds of competing apprentices from all around the country.

A big influence for Holly was having a strong female role model whilst studying at The JCB Academy Sixth Form, “I had a female lecturer [Paula Gwinnett] during my time spent in The JCB Academy and, as a woman within engineering, she was a great role model to encourage me into the industry.”

Ms Paula Gwinnett, former director of The JCB Academy Sixth Form, said: “It takes a special kind of person to excel at the higher apprenticeship. Higher apprentices must secure academic achievements, commensurate with their traditionally educated peers but they also need the drive, tenacity and resilience necessary to thrive in a competitive environment in the workplace. Holly has personified what it takes to succeed as a young engineer and leader and it has been both a pleasure and a privilege to work with her. Recognising latent talent and creating an environment in which young engineers can fulfil their potential has been my mission since leaving industry to teach and learners like Holly have made it absolutely worthwhile.”

Holly started at The JCB Academy in its first year in 2010 and went onto the academy’s sixth form to study an engineering diploma and two A levels alongside. Mixing subjects like this is quite unique to most education establishments and Holly believes it gave her the edge over other learners, saying: “The difference for me was that I was still able to get my A levels and also complete a Diploma in Engineering at the same time; this would give me the edge over other people who were only studying one of these qualifications but not both.”

“Choosing to go The JCB Academy was a massive step in my education, it was a new school and I was to going into a subject in which I did not have a lot of experience – engineering. I was constantly told that it might be a bad idea and I would regret it, but looking back now it is one of the best decisions I ever made. I always knew that I wanted to go into engineering; I have a constant need to know how things work and how they are put together, in addition to this maths and physics were my top choices for A Level subjects. I went to all of the open days for The JCB Academy and saw all of the great opportunities working with the sponsoring companies, and in conjunction with that the fantastic learning that was being offered through the teaching and facilities they offered. The difference for me was that I was still able to get my A levels and also complete a Diploma in Engineering at the same time; this would give me the edge over other people who were only studying one of these qualifications but not both. I knew that it would be extremely hard work but in the long run it has been 100% worth it.”

“The key difference for me was that the learning was not based in a textbook; everything that you learnt was for a purpose and you saw that from the real life examples that were shown through the sponsoring companies. This was extremely clear in the engineering Diploma with each module being based around a company. Some examples were – Learning Quality with JCB and understanding how they use quality control within the business to create world-class diggers. And with Bentley how they pushed for innovation in design to create intricate work that was put into the vehicles. The beauty of this way of learning was that you gained real life experience within global companies, making you ready to be integrated into them in the future. In addition, the A Levels were based around engineering issues, which naturally made them more interesting and easier to understand.”

“I know that all the aspirations I now have would not have been possible without the learning, support and encouragement that I received from The JCB Academy.”